Environment (IEE) of the Chinese Academy of Sciences, focused on a typical megacity in the NCP (Beijing), a series of OA markers, including n-alkanes, fatty acids, n-alcohols, PAHs, hopanes, saccharides, phthalates, and phthalic acids were quantified. The main objectives were to investigate the seasonal variations in chemical characteristics and source variations of these organic compounds. Moreover, results from this study were compared with those of studies from different years and locations to gain insights into the inter-annual variations and spatial distributions of primary and secondary OA in China.

The results showed that saccharides were the most abundant (340.1 ng m−3) species detected, followed by phthalic acids (283.4 ng m−3), n–alkanes (174.5 ng m−3), fatty acids (164.3 ng m−3), polycyclic aromatic hydrocarbons (PAHs, 123.2 ng m−3), phthalates (117.7 ng m−3), n–alcohols (58.6 ng m−3) and hopanes (26.3 ng m−3). In summer, high proportions (8–24%) of phthalic acids, n-alkanes, fatty acids, and n-alcohols indicate dominant contributions of biogenic emission and atmospheric oxidation to OA in Beijing. In winter, when anthropogenic sources prevail, saccharides, polycyclic aromatic hydrocarbons, and hopanes are more prominent (4–25%) (Fig.1). Spatial distributions of these OA markers in China show higher concentrations in northern cities than in southern cities (Fig.2). The inter-annual variations of OA markers, except for hopanes, from 2001 to 2015 suggest significant alleviation of the primary OA pollution in Beijing, with an average reduction of 35–89% compared with those before 2008. Increasingly large vehicle fleets have increased hopane concentrations since 2008, but the levels were 35% lower in 2015 than those in 2010–2011 because of the tightening of emission controls for vehicles (Fig.3).

This study provides a long-term and geographical comparison of OA markers, demonstrating the temporal and spatial variations in primary OA. 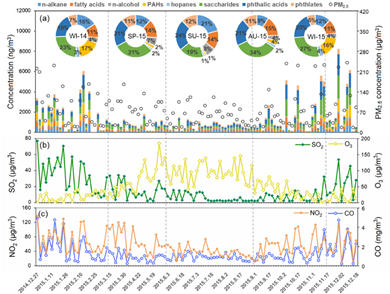 Fig.1  Seasonal variations of the measured OA markers and their fractional contribution and PM2.5 concentration (a), together with SO2 and O3 (b), NO2 and CO (c) in Beijing 2015.